Photo by Brocken Inaglory at commons.wikimedia.org

Hey, have you heard this, “The early bird gets the worm”? Today’s post is all about productivity and how we can squeeze every ounce out of our day. But there’s more, you’ll also learn about opportunistic animals and how you too can avoid the pitfalls of certain unlucky critters and potentially turn your life around for the better!

Lifehack once posted an article called The First Thing Successful People Do Every Day, which did indeed reveal a number of things successful people do the first thing in the morning. The list of successful people included Starbucks’ CEO, Apple’s CEO, Benjamin Franklin, and Mark Twain—arguably all very productive people. On a personal note, the first thing I usually do in the morning is open my eyes and hit the snooze button, but that probably explains why I’m not very successful. But let’s get on with the story. To sum up the blog post, the famous people mentioned did the following every morning: checked email, did something good, did something difficult, learned something, and planned.

I’m all about streamlining and simplifying, so I believe we can further reduce everything on the list to: follow a daily routine. Right? Everyone mentioned in the article seemed to have created their own daily habits, ones that they liked doing or were challenged by or wanted to get out of the way. And it seems like these successful people were all being or attempting to be productive in one way or another. However, one person didn’t have an extremely productive routine as he liked to greet people at work, but it was, in his estimation, “good for team building”. Thus and therefore, are you still with me, after streamlining the entire article we can come to a very enlightening conclusion: Successful people follow a productive routine in the morning. Aha!

Routine will help you live the dream 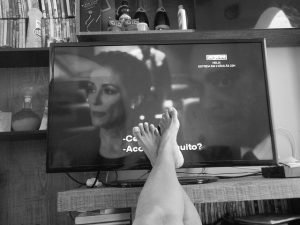 I knew it! I knew there was something special that successful people were doing that I wasn’t doing and there it is! Boom! Routine! So this is what we must glean from this article to apply to our daily lives: To be successful at anything we must develop a productive morning routine! I’m sure most of us follow the same routine every morning, but unlike the successful people mentioned in the article, a lot of us just get up and go through the motions. I know I struggle to do anything in the morning. In fact, getting out of bed is the hardest thing for me to do each and every day. Seriously. So if I’m up, that’s a huge win for me.

But perhaps to be successful I need to get up a bit earlier, go to sleep a bit earlier, and try to develop a productive morning routine—like say write for an hour or do yoga or play the bass. That all sounds great, but as I said, I’m not a morning person, I’d rather do those things in the evening after I come home from work. Maybe that’s where I’m failing, I’m not taking advantage of the morning when there are no distractions, when my mind is clear, and when the air is crisp and clean, and early birds are eating early worms. On that note, it’s interesting that Chinese people say it this way, “the early bird catches the worm, but the early worm gets eaten.” In other words, don’t be an early worm. Which is very thought provoking, they look at it from the worm’s perspective. Very interesting! And that got me thinking, no one really followed that early bird to see what happened to it. Hmm.

Off track with early birds 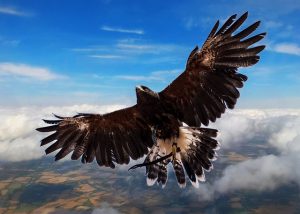 Maybe the afternoon hawk eats the early bird and flies off to feed its young. Hours later the afternoon hawk gets shot and carved up by the evening hunter. I bet that hawk probably tasted pretty good with a belly full of early bird! And then the evening hunter gets drunk and trips over a rock that the midnight bear left out! Think about that! The drunk falls down and cracks his head wide open. There’s blood and beer everywhere, I mean it’s horrific! The bear gingerly approaches its prey, takes a whiff of the drunk, and immediately decides not to eat him because he reeks of alcohol. Disappointed, the bear wanders off and takes a nap. It wakes up a few hours later and is ferociously hungry and decides to jaunt over to a fast flowing river to look for a fishy snack. Sure enough, he spots a pre-dawn fish doing what pre-dawn fish normally do: mate. 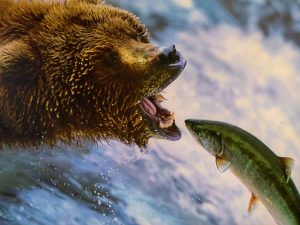 Imagine trying to spawn and spread your seed in the wee hours of the morning and then this huge hairy pachyderm (That’s Latin for bigass thick-skinned beast, which technically describes elephants, hippopotami, and such) comes up and rips you away from your mating ritual—I mean, that would suck! As the sun just peaks up, the fish and the bear have an epic battle and edge closer to a massive waterfall and they tumble head over heels and fins and paws down the waterfall and…Boom! They succumb to gravity and wetness and waterfallery and wash up on the side of the river.

That’s not all! Now imagine being woken up by a thunderous wave produced by a huge bear falling over a waterfall! Not a good way to start the day. But if you’re a worm, you’re an opportunist, so you go after that bear, don’t you? The pre-dawn worm gets the bear and maybe even a fish. After pigging out, the worm gets fat and slow and just wants to lounge around, basking in the sun and enjoying life. Bammo! That early bird swoops down and good-bye worm! Makes you think doesn’t it?

There’s an adage for everything

And frankly, that just goes to show there’s an old adage for everything, but let’s circle back to morning productivity and routine. Both the early worm and the early bird were also following a routine. However, it wasn’t very productive for the worm (or the early bird). That’s why it’s so critical to be productive in the morning or else you’ll end up like that worm. Wait, if that worm wasn’t productive, it wouldn’t have been eaten. Yet if that bird wasn’t productive, it wouldn’t have found a delicious meal. So maybe the deeper concept here is: are you a worm or a bird? Neither. Ok, I’m drunk! Where were we? Right, success first thing in the morning. Ok, point blank, do you want to be successful? If so, some successful people, according to the article, have found success by following a productive routine in the morning. So perhaps we should all try it out and see what happens, but don’t blame me if you get eaten by a bird or by a bigass bear!

Hillel Groovatti is the author of the short fiction collection entitled Totally Losing Face and Other Stories.

Hillel Groovatti is originally from the United States, but has lived abroad for over fifteen years and travelled extensively--visiting over fifty countries. He currently lives and works in China where he is inspired every day with new story ideas. His first book of short fiction, Totally Losing Face and Other Stories, is currently available on Amazon.com in ebook and paperback formats. Stay tuned for his second book coming out in the second half of 2017. For more information, please visit www.groovatti.com.
View all posts by Groovatti →
This entry was posted in humor and tagged afternoon hawks, daily routine, early birds, early worms, evening hunters, funny, hack, humor, humorous, lifehack, midnight bears, productivity, productivity hack, successful people. Bookmark the permalink.